HYBRIDIZATION AND SPECIATION
My main research interest is hybridization, the interbreeding of different species. How do species remain distinct despite (extensive) hybridization? Why does an individual choose a partner from another species? Why are hybrids less viable or successful compared to ‘pure’ individuals? Which genomic regions contribute to reproductive barriers between species? And which genomic regions can freely flow (i.e. introgress) across species boundaries?

THE TRUE GEESE
To answer these questions, I have been studying the evolutionary history of the True Geese (Anseriformes, Anatidae, Anserinae), a group of birds with a high incidence of hybridization. This research – my PhD project at Wageningen University (the Netherlands) – has resulted in a trilogy of papers on goose hybridization (see here, here and here). At the moment, I am continuing this line of research as a postdoc at Uppsala University (Sweden) under the supervision of Hans Ellegren. 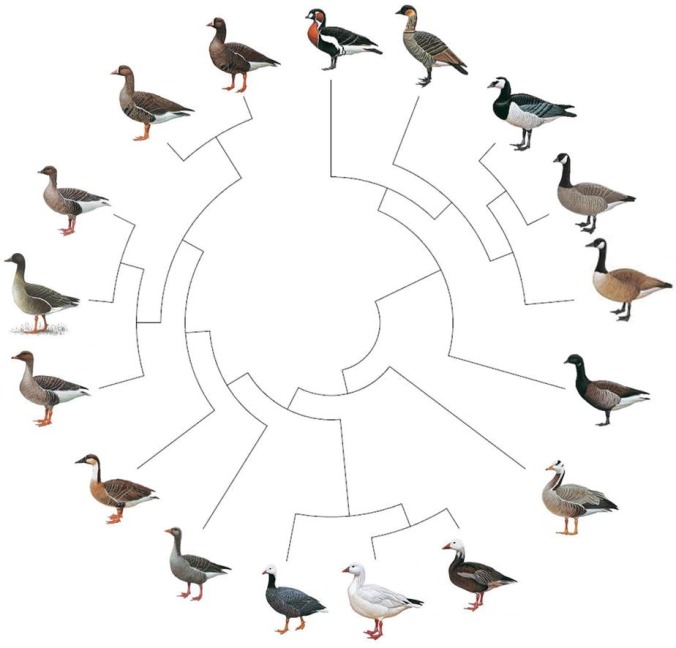 THE AVIAN HYBRIDS PROJECT
Apart from my goose research, I am also interested in avian hybridization in general. Therefore, I started the Avian Hybrids Project, a website gathering the scientific literature on hybridization in birds. Furthermore, I have synthesized the current knowledge on introgression and hybrid zones (see here and here).

PHYLOGENOMICS AND NETWORKS
Phylogenomics entails the reconstruction of evolutionary relationships between species using genomic data. Given the widespread occurrence of gene tree discordance (i.e. different genes resulting in different gene trees), I have advocated the use of phylogenetic networks (see here). Together with Robert Kraus (University of Konstanz), I am investigating the application of such networks to account for hybridization.

Other Projects
During a side project (August 2017 – January 2018) at the Karolinska Institutet in Stockholm, I explored the evolution of transfer RNA (tRNA) in birds using whole genome sequence data from several bird species. This project was under the supervision of Claudia Kutter and Alexander Suh.